-Focus on Biodiversity Offsets and Banking-

Although China has a very rich biodiversity, it is also part of a region where biodiversity resources have declined rapidly. Threats to biodiversity in China include a large human-uses of economic，industrial developments, climate change, and exotic invasive species, which reduced the habitat quality, resulting in losses of biodiversity. Hydrological engineering projects, which interrupt the natural flow of rivers, and conversion of wetlands for agriculture and unsuitable construction and infrastructure projects in the flood plain have destroyed ecosystems and driven species out of their natural homes. Through the investigation of literature to supplement the Eco-Compensation Mechanisms and improve it.

2.3 Main Mechanism of Ecological Restoration in the Eco-Compensation

2.3.1 Polluter Pays Principle: This principle requires compensation and damage body consistent with a main damage to the environment in the process of economic construction, as the obligation to restore it. But does not require compensation must be restored in local place, if the destruction of the economic zone is inevitable, allowing restore in the ecological zones .This does not mean that in the economic area can arbitrarily be destroyed. Must strive to undermine minimize compensate part only in the economic zone if cannot be fully restored. Investors and builders must be done before the project was launched in compensation arrangements and budget, the total amount of investment must contain the appropriate proportion of compensation costs.

In order to maintain the ecological balance overall, a distinction should be made between the different situation to implement the same amount of compensation and the doubling compensation. The same amount of compensation is the destruction of the amount equal to the compensation amount. For example, there is the destruction of 1Ha of forest or grassland in one place, to create 1Ha forest or 1Ha grassland in another place. Some damages maybe no clearly measurement units, can use comprehensive measure to achieve the same quantity. The doubling compensation is the quality of compensation larger than the quality of destroyed. For example, in one place, cut down five trees, 10 trees planted in another place and ensure survival.

In the development process, if cannot evade, minimize the environment impacts, then have to do biodiversity offsets to balance the biodiversity loss with mitigation, and restoration efforts, so that the total acreage of biodiversity in the area does not decrease (No Net Loss), but remains constant or increases (Net Gain) based on the Polluter Pays Principle (PPP). It is implemented in many countries. Typically, developers do not have the ability to repair or transplantation biodiversity environment, which requires the expert in this field, and the one-off biodiversity offsets will be found they are not continuous on the map, we need a specialized agency on the comprehensive management and credit transactions, which is a good means of financing, too. We called that Biodiversity Banking. Biodiversity Banking has been imported to the United States, Canada, Australia, and there are pilot projects in the France, Malaysia, and United Kingdom.

2.5 Which Problems can be solved by Biodiversity Offsets?

Conservation groups, governments and companies are looking for practical mechanisms that integrate environmental issues into planning and development. Biodiversity offsets are conservation actions intended to compensate for the residual and unavoidable loss of biodiversity incurred during new developments. They are increasingly attracting attention because of their ability to achieve more, better and higher priority conservation and livelihood outcomes than currently occur in the context of infrastructure projects. Biodiversity offsets not only rehabilitate sites but also address the company’s full impact on biodiversity at the landscape scale, thus assisting companies to manage their risks, liabilities and costs. In addition, biodiversity offsets can support sustainable livelihoods, addressing some of the underlying causes of biodiversity loss incurred by human use of natural resources. (Kerry &Mira, 2007) 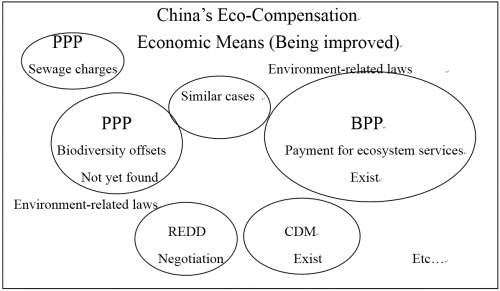 Relative to the theoretical study of the ecological compensation, the instances are not rich. Forest Revegetation Fee and Forest Ecological Benefit Compensation Fund are the existing instances of ecological compensation, the former is similar to the in lieu fees of United States, it belongs to the government funds into the financial budget management, and implementation of earmarking. Use the Forest Revegetation Fee to recovery, manage and maintain the forest, and it was defined as similar case of biodiversity offsets by The Business and Biodiversity Offsets Program (BBOP). The latter Forest Ecological Benefit Compensation Fund based on the China’s Forest Law, it not only used to restore and manage vegetation, but also to compensate for the loss of specific populations, such as returning farmland to forests, the economic compensation to farmers. China’s current situation are the lack of practice and Eco-Compensation law, although there are many theoretical studies basis. 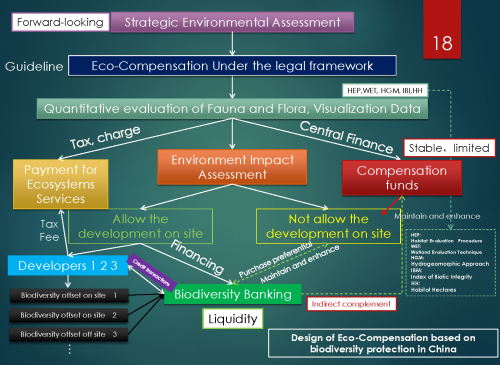 Design of Eco-Compensation in China

Now, Eco-compensation has not introduced a system of regulations yet, although they are being considered, China exists the concepts of biodiversity offsets in the law (Forest Law) and policies (Technical Guideline for Environmental Impact Assessment Ecological Impact), in addition, there are similar cases in China (China’s Forest Revegetation Fee). Biodiversity offsets and banking can be classified in the Eco-Compensation, they are not in conflict, we can learn from biodiversity offsets and banking to improve the system of Eco-Compensation, for example, develop the law to improve transparency, attract more third parties, combined with environmental impact assessment or strategic environmental assessment, use quantitative evaluation to assess ecosystem, suggest to use Habitat Evaluation Procedures (HEP) for animals, Habitat Hectares Socring Method for native vegetation, last we need practice, plan to implement the biodiversity offsets or banking pilot projects like UK, Malaysia, and France.